The Page Template (PT) defines the overall layout of a page. It is in fact  a master page which defines the header, footer and navigation on a particular page type. It also defines where Component Presentations are placed on the page. The picture belows shows what is defined in the Page Template 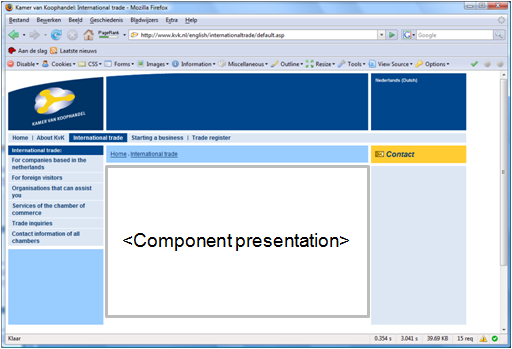 In addition it defines:

The page template is used in the static publishing model only. 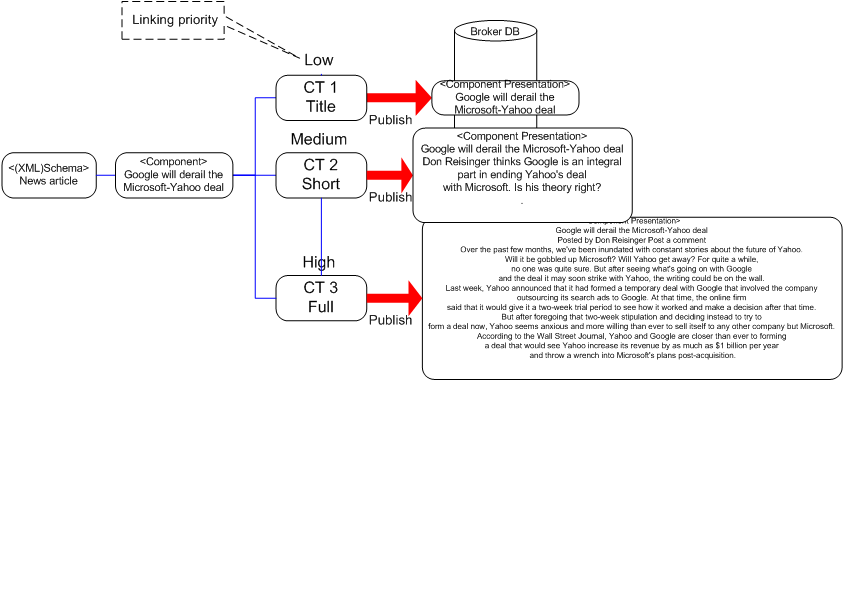 A Component Template  or CT is a small program which is used to render (parts of) components based on  specified schema’s. In other words programs which create chunks of XHTML. In Tridion parlance these chunks are called Component Presentations.

It is possible to use different CT’s to render the same content. An example might be the rendering of a news article. You might want to present on your homepage a link to a new article. On a news overview page you might want to display the title with a short description of the news content. And there will be a place where the full article is displayed.

This can be achieved by defining three different CTs where each one renders the specific occurrence on the website.

Configuration options for a CT include:

A component is an instantiation of one of the Tridion (XML) schemas. It is a piece of XML which can be validated against the XML Schema that was created for the specified content type. It contains both content and metadata fields. Useful GUI functions include:

A Tridion schema is used to define both the content and meta data fields for a certain type of content (=component in Tridion Lingo). It is an XML Schema which can be generated from the Tridion GUI. Not all options available in XML Schema are available from the GUI. However it is possible to use most XML schema functionality by manually editing the XML Schema.

An example could be the following schema for a news article:

The difference between meta data and normal fields is simple: meta data fields are published to the broker DB to the “custom metadata Table” content fields are not. The advantage is that you can query the metadatatable for specific content (i.e. select the last 5 news articles).

Security can be applied to give specific users the right to create news articles and deny it to others.

www.TridionTutorials.com: Schema (site down since 10-2008)

The goal of an alias is to create a link to some article on your web page that is short and descriptive enough for your audience to remember. Application could be for a TV commercial or printed media. In these cases you want to keep the URL short and simple.

For example the url http://website.domain.com/products/2008/1235469/default.aspx is impossible to remember. Therefore you want to be able to create a link like www.domain.com/alias. I have seen a number of interesting and very complicated solutions to this problem. However the easiest way to implement it is the following: END_OF_DOCUMENT_TOKEN_TO_BE_REPLACED

Shortly after the go live of the chamber of commerce website we identified some parts that were at the end of their software life cycle (TODO:unable to find suitable link will create post on that myself).

One of these components was a vehicle called the “product selector”. This part of the site was styled very differently and had a very strong willed DB text search function. Needless to say the “sale” of the products are regarded as important KPI’s for the website. The products contained in this vehicle were (in order of appearance):

END_OF_DOCUMENT_TOKEN_TO_BE_REPLACED

This project was the first Tridion project for Deloitte US. As we all know Tridion is currently ranked as the lead Web Content Management System by Forrester (login requirerd). As Tridion is executing its push into the US market it was only a matter of time before Deloitte US would be engaged in a Tridion project.

The internal Deloitte network led them to me. I went over there for one week to share the knowledge we already had on Tridion. I feel the following quotes speak for themselves:

“Albert helped us ramp up very quickly with Tridion’s solution and best practices. The information he shared with us was insightful and got us prepared for a week long workshop sessions with Tridion and the State. Demonstrated excellent communication style and customized the discussions based on the auidence i.e., provided high level summary as well as dove deep as needed.”

“Just wanted to drop you a quick note that Albert is doing a great job supporting our team here in Minnesota as a Subject Matter Expert in Tridion.  His insights and best practices document are very helpful to us and he has already earned the respect of the lead technical team members.  We’re looking forward to having him to continue supporting us remotely and potentially even a return trip to Minnesota if necessary.”

At the Dutch Chamber of Commerce I was issued the job of getting a failed web project up and running. … was the implementation partner. I have been directing their efforts and straightening out the Tridionarchitecture and FO for a successful go live. In addition I set up and gave a Tridion course for the web editors (30) at the Chamber of Commerce.

The problems that were at the base of the failing project were at every level: Tridion Blueprinting, Tridion installation, DB performance, code quality, functional mismatches, HTML templating.

The biggest problem was caused by a wrong choice for the blue print architecture. It involved making copies of the content publication for each regional chambre. The practice of copying content should never be done other then for another website or another language. Making copies of data is essentially wrong and should be done with great consideration of the consequences.

The site had its go live in december 2007 www.kvk.nl. One of the great achievements is getting 40K pageviews an hour out of just one Tridion presentation server. In addition generating the 13 different navigation files is done in under 5 seconds.

Advisor datadictionary for the ministry of VROM. The goal was to aggregate and minimize data from 30 licenses for which the 400+ governmental agencies granting them had developed a large variety of different forms. I needed to identify and categorize the essential data into a datadictionary, which could then be used to create one form to be used by all agencies.

During this project I supervised the work of a few junior project members. For this project I used a tool called Enterprise Architect which was able to generate WSDL and XSD’s to be used for the definition of messages. In addition I wrote an XSLT program which transformed the XSD into a human readable datadictionary.

This is the blog of Albert te Boekhorst. Albert is a senior manager in Deloitte Digital.

Iconic One Theme | Powered by Wordpress